after having dropped my single on the internet (like a grain of salt in the ocean of music), i’ve started thinking about developing the album. i don’t have enough written yet for the 9 or 10 tracks one would expect, but the aim is to spend the rest of the year getting it together.

i will probably poach some elements of the r is for arm ep, but there is some serious remixing to be done on these because i think i went a bit overboard with the compressor. i want to keep the sound balanced between tight and gritty – so i should really leave the multiband gubbins up to the mastering engineers. these tracks also need a better vocal dimension – there are some themes in there, but i need to draw them out lyrically. i’m usually pretty detached from politics, but with the swell of the right wing in recent months i may push back with DirtyBootJack.

i stuck my head up the soundcloud this week and discovered some dark and meaty electro by a dude called AkA. he seems to have some really good techniques for getting loud and powerful sounds out of his gear and producing stuff on a dark edge.

this must have influenced me a bit as i started my next track, because for some reason i found myself fumbling around in the key of E. it’s the kind of key where one false move can land you in melancholia, but at the same time has some jazzy chord options and intervals.

i stuck with it, and managed to pull a groove out of something that was heading for monotony. i got some nice tight drums together using the electro/acoustic crossover that i’ve been developing for a while.

i love the deep thump and crackle you get from retro-style drum machines, but i also like the organic feel you get from acoustic drums. i guess i’m trying to develop a sound that has one foot stomping to the groove of live performance, and the other dangling precariously above the biting jaws of electronica. hopefully i can marry the two together. i think the track is going to be about the pushing of buttons and taking control of your life; because it seems we need to push a lot of buttons before we gain such control. 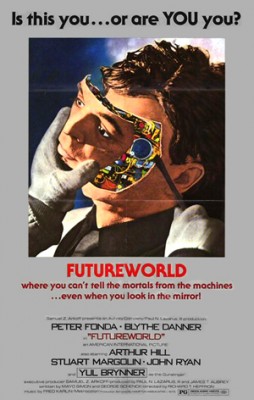 i watched the the film futureworld the other day. this is the sequel to the classic westworld, and the evil Delos corporation is returning to take over the world with robots – or at least mannequins with crystal set radios for brains. apparently, “nothing can go wrong” at Futureworld. unless you are one of the world leaders they intend to replace with a robot, of course. you can’t get much more wrongerer than that.

the film is enchanting in a way that only 1970s sci-fi can be. it desperately wants to convery a serious message about the perils of technological reliance. but as we look at the production from beyond the future in which it is set, the message doesn’t shout as loudly as the decor. i totally love it. peter fonda’s spectacles are reminiscent of something you might find in a brighton joke shop, and the tourist apartments are carpeted wall to wall with thick red shag. the musical score is quite evocative though, and certainly has some progressions i might probe deeply for inspiration …