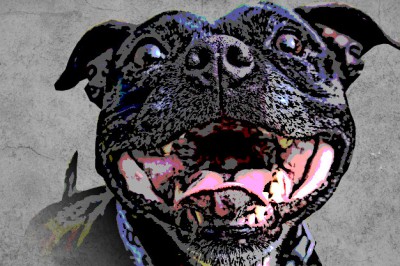 over the last few months, i have been doing a bit of research into dubstep and experimenting with its production. this is all to support voxel records’ electronic music adventures series, which you can read on the homepage.

dubstep is a style i particularly like, but i’ve never tried writing anything like it. despite my glasgow upbringing, i have also lived and worked in south london, which is very much the epicentre of the dubstep earthquake. it’s such a melting pot of influences that it’s not surprising that so much awesome club music grows up there.

so initially, i thought this would be easy … you like the music, you know how they do it, you make your own, right? ermm … not so. i actually found this project really hard.

i am not a dj and i don’t really do a lot of performing these days. i’m also not part of any collective that specialises in this kind of music, so i started with lots of preconceptions but no experience of constructing it 😛

after some digital digging through dubstep tracks old and new, i got the general feel. i decided to make something that demonstrated how lots of different styles (synthwave, tech house, glitch and even metal) can slot into the power of dubstep production. i sketched out a structure and gave myself 4 minutes to play with.

modern tracks seem to build up reasonably quickly, exploiting filter sweeps, and most producers make use of drops between sections to maximise dramatic effect. i really like the technique of building to something quite frenetic at the end, so i allowed a minute or so of some pacey riffs at the end.

tracks often start with spacey reverb and delay effects on samples, or even more obvious skank rhythms. this is no doubt the influence of dub reggae and ska.

the tempo is really slow to start with, which makes a full tempo wall of sound at the end even more dramatic.

so i had a structure that would build up through some kind of filter sweep with delays and off-beat rhythms. then, it would plough into some wub-filter effects but still hold the pace back. the last section would drop into something with energy at high speed.

the next thing to check out was how the bass lines and riffs work. apparently, much of dubstep naturally gravitates to mixolydian scales, which straddle ominous minor keys but also provide blues/funk options. bass lines in dubstep are more about intensity, rhythm and effects, but it is important to keep them in key with any lead parts. my moog sub phatty was pretty much the only candidate for bass line duties.

the mid-range and top end are traditionally peppered with thin, electronic drums; but quite a lot of tracks these days belt out bold, hollering riffs that leap up and down the octaves. this is something that is in line with the cheesy retro tones of synthwave, but turns everything to eleven in terms of filters, overdrive and sub-oscillators. this is how we can get a really beefy lead sound from an otherwise puny signal.

this got me thinking about effects. the trademark of a lot of dubstep is the wub or wobble filter. this is a bit like riding the cutoff frequency of some meaty filter, in a triplet or syncopated rhythm. so for this i got out the totally insane wow 2 filter from sugar bytes. this thing is often uncontrollable, but it is pretty easy to make basic wobble filters.

the wub isn’t the only critical effect, though. i pored over my selection of delays, other filters and distortion. i have a pretty god stock of these; but to create the beefy lead i decided to run the juno ju-06 through my moog mf drive pedal.

finally, i noticed that there’s quite a lot of random glitch effects in a lot of tracks. i’ve owned a copy of illformed’s glitch for many years, and recently bolstered it by adding effectrix. these software plug-ins allow me to make sequences of all kinds of effects; and when combined with heavy sounds they can inject an attitude and rhythm all of their own.

this gave me a decent palette to work from, so i set to work finding some riffs. i basically played around with octave leaps and arpeggios for absolutely frickin ages before i got anywhere near something that felt right. this was by far the hardest bit of the task.

whilst dubstep is simple in terms of melody, some people can just locate those amazing hooks which sound even better when they’re fucked up with high-speed effect-sequences. it was a bit harder for me this time around :s

as i layered the instruments up and tore them back down, i was pretty conscious to avoid over-producing the track. one important thing to do is to keep the instrument synchronised rhythmically, so all the sounds hit home hard together. it’s also important to leave lots of gaps and drops between riffs and sections to keep that stuttered, implied rhythm undulating.

one of the most exciting things for me is inter-working riffs, sounds and effect sequences. it’s a bit like jazz, where instruments play off each other. but in dubstep, they do battle.

this kind of structure might build up some drum breaks into a big fill, or it might be a glitch-off between two sets of effected instruments and riffs.

the general idea is that each component take its turn for a bar, and then another component has a go. the riffs, beats or effect sequences then develop over a section of eight bars to climax together, and then the track drops away into a kind of breather section before starting again. there’s probably a name for all that, but who knows …?

i literally sat with bits of paper trying to work out what these things were doing. as a drummer, it comes quite naturally to me in performance terms because it’s very much how jungle and breakbeat work. however, getting this kind of thing programmed into instruments and effect sequences was really hard. 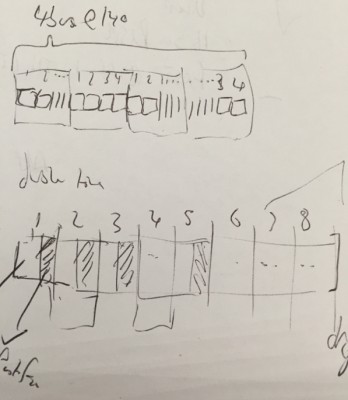 eventually, i managed to create a few riffs, wubs and breaks and i dropped them into the structure i’d planned out earlier.

mixing the track was also really hard. like a lot of club music, you want to keep the dynamics and power up in your face. with modern dubstep, it’s harder than normal because you’re trying to mount an assault on the whole frequency spectrum and yet still keep bold riffs and consistent rhythms between instruments. it took me ages to create a viable mix.

when i sat my track next to some of those i’d picked from the crate at the beginning of the project, i got that common feeling of totally missing the point and producing something puny compared to the muscle of the real thing.

but at the same time, i was trying to blend of a number of different flavours in the dubstep cook book. it’s a bit like trying to create the subtle flavours of a good curry from hand-ground spices when everyone else is just wants to pile on lashings of hot sauce. so why bother? that was definitely a learning experience for me – sometimes you’ve just gotta go with the hot sauce out of a bottle, but just tip it all in there.

so, good dubstep is really about extremes of production and expressing the attitude of urban nightlife. but its influences allow many other musical styles to grow a pair and maximise their appeal. i really enjoyed making this track, and learnt a lot, even if i am no true dubstep aficionado 😀

the track is called air dog and you can listen to it on soundcloud here.

why air dog? well … it’s the name of a dog toy made by the same company that makes the wubba. i used to throw this for our old staffie in ruskin park, and coincidentally it is one of the names given to the wobble filter that pervades most dubstep tracks. so there you go 😉